Volcan Santa Ana — nearly 2,440 metres above the nearby Pacific Ocean and towering over the classic cone of neighbouring Volcan Izalco — is known as Mother Mountain to the Maya people. ... 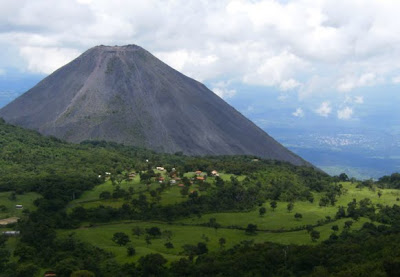 We now offer live 1:1 online Spanish lessons with professional instructors via Skype. Contact us for more information... info@salvaspan.com
and schedule your next live video Spanish lesson with us on Skype:
http://salvaspan.com/Mi-Diario-Salvaspan.html
. 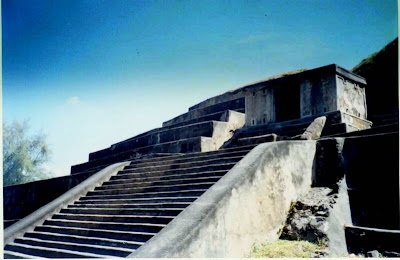 Posted by www.salvaspan.com at 2:43 PM 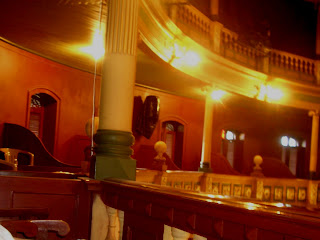 Article on a youth media group in Maryland that made a short film on El Salvador: 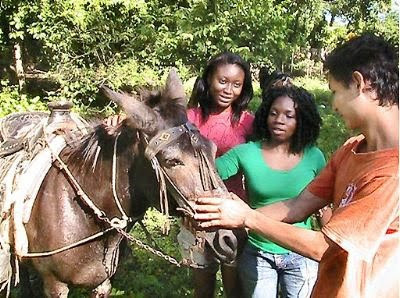 Douglas Ceron-Reyes knew his trip to El Salvador with the Gandhi Brigade youth group would help him learn more about his family's Salvadoran roots.

But when Ceron-Reyes interviewed Salvadoran female soldiers for a short film about their fighting in the country's long, bloody civil war, he didn't realize how close to home their experiences would be.

"My mother was going to fight in the civil war," Ceron-Reyes, a Montgomery College student, said Saturday, just a few days after several members of the Gandhi Brigade returned from a 10-day trip to El Salvador. "Instead, she left for the U.S. to live with my grandfather and her brother."

"I didn't know any of this until I got back from El Salvador."

Like many other Salvadorans, Ceron-Reyes' mother fled El Salvador during the war, which began in 1980 and ended in 1992. The war killed an estimated 75,000 people. Through videos they shot with the help of Salvadoran youth groups, the Gandhi Brigade members quickly saw the stranglehold the war still has on the country.

"It's a huge scar on the country that they are still coming to terms with," said Gandhi Brigade Executive Director Richard Jaeggi, adding that he hopes to bring Salvadoran groups to the United States next year.

Eight youth members of the Gandhi Brigade made the trip, from Aug. 1 to Aug. 11, along with several of the Silver Spring-based organization's employees. The trip was funded by the California-based Chino Cienega Foundation and almost $10,000 raised through fundraising events and private donations over the past four months.

The Gandhi Brigade is a Silver Spring-based nonprofit that provides media training to middle school, high school and college students who then promote peace and nonviolence in the community. The El Salvador trip was dubbed a "media exchange" where the Gandhi Brigade youth taught two similar Salvadoran youth groups how to use media to promote their message.

The Gandhi Brigade met with the groups, determined a variety of film topics and shot the collaborative documentaries in the capital city of San Salvador and Suchitoto.

On Saturday, the Gandhi Brigade screened first cuts of the films, mostly in Spanish, to about 30 people. Translations and final cuts will follow with another screening event to better educate the Silver Spring community on the homeland of many of its members.

"Hopefully this can give us a better understanding and lead to some solutions," said Silver Spring resident Tony Hausner, who organized the Silver Spring Safe Summit in May and attended Saturday's screenings. "… The more you know a culture, the better you can deal with it."

The youth said they want to pass on the lessons they learned to those who may disparage the local immigrant community.

"You think, ‘Why do they come here from El Salvador, it's such a beautiful country?'" said Hawa Toure, a Montgomery College student and member of the Gandhi Brigade, whose parents emigrated from the Republic of Guinea. "But if you saw how the people were treated, you would know why."

Within the Gandhi Brigade contingent was a diverse mix of races and languages, but only Ceron-Reyes had direct roots to El Salvador. The language barrier posed initial communication problems, but everyone on the trip said the videos turned out better than expected.

Toure's film focused on the difference between the Salvadoran military and the Farabundo Martí National Liberation Front (FMLN) guerrilla troops that fought each other in the civil war.

The left-wing FMLN staged a coup against the military-led Salvadoran government in 1980, protesting allegedly fraudulent recent elections and a skewed class system. The war raged for 12 years, killing 75,000 in the process, until a truce was established in 1992. The FMLN army then spawned a political party, which won the 2009 presidential election behind Mauricio Funes.

Toure's film features interviews with ex-soldiers, but Toure said it was difficult to find people willing to show support for anyone besides the FMLN.

Another film featured interviews with Salvadorans that have family members seeking financial opportunities in the United States.

"Now I understand why my parents came here," said Carlos Eyzaguirre, a Montgomery Blair High School graduate whose parents are from Bolivia.

In the film about female soldiers, one woman speaks about losing her husband and brother in the war and feeling obligated to fight for her own safety. The video featured photographs of the interview subjects in aprons and sundresses with rifles around their necks.

On Saturday, Ceron-Reyes wore a polo shirt with the logo of the FMLN. The women in Ceron-Reyes' film fought for the FMLN, and his mother would have as well had she not left the country.

"It's a crazy coincidence," he said. "I wasn't expecting to learn so much about my own history."

-The Gandhi Brigade's sister group, Mixed Unity, will hold the first "Stop the Violence Peace Walk" from noon to 3 p.m. Saturday. The walk will begin with a vigil at Eastern Carryout, at the corner of Piney Branch Road and Arliss St., near the site of a shooting last Nov. 1 that left Montgomery Blair High School freshman Tai Lam dead. The walk will last two miles and end at the Pyramid Atlantic Community Arts Center at 8230 Georgia Ave., where there will be speakers on nonviolence.

-To donate money to the event, contact Tip Fallon at tip@igotheartonline.org or at 301-523-0809. For more information on Mixed Unity, e-mail MXDunity@live.com.
Posted by www.salvaspan.com at 4:48 AM

Posted by www.salvaspan.com at 8:06 AM

Posted by www.salvaspan.com at 7:44 PM

Posted by www.salvaspan.com at 7:42 PM 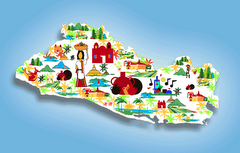